Growing up on Long Island in the Sixties, I have fond memories of celebrating Halloween with family, neighborhood friends and school mates. To be outside at night in the cold and dark was an adventure. It was a time when knocking on the doors of neighbors, some rarely seen, and catching a glimpse of their lives was mysteriously tolerated.

Halloween didn’t start on October 31st, but in the preparations that took place in the weeks before. First, we would have to come up with an idea for a costume, which included time spent imagining who we wanted to be this year. This was my favorite part never having had a clear sense of who I was anyway – so I enjoyed thinking about characters that had caught my fancy and what it would take to assume their likeness. Although we did occasionally purchase a costume in the store, often times we made our own.

And, because my big sister’s birthday was October 28, she usually had a party with her friends where I could at least tag along to see what the big kids were up to. There was a lot more to Halloween than just the big day of Trick or Treating.

It was around Halloween that my neighbor friend Regina, invited me over to watch a movie that she liked. Regina loved movies, and for the most part I shared her tastes although it was a struggle for me to endure watching four hours of Gone With the Wind with her. 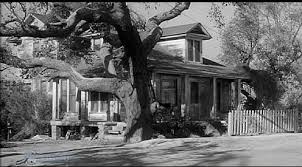 That day we watched To Kill a Mockingbird, a movie we both came to love so much that we looked forward to watching it again every Halloween season. Except for the last scene, the movie didn’t have that much to do with Halloween, or did it? The ending scene takes place near Halloween and finds siblings Jem and Scout walking alone in the woods returning home from a school pageant. Scout, dressed up as a ham, is walking home with Jem when they are viciously attacked by Bob Ewell, the father of Mayella Violet Ewell, the accuser in a trial in which the children’s father, attorney Atticus Finch, defends Tom Robinson, a black man Mayella accused of raping her. The children are rescued by the mysterious neighbor Boo, who they had never seen before but had only heard stories about. Boo must have followed the children to the pageant and so is able to defend them from Bob Ewell’s attacks as the children make their way home.

As a child watching this film, I loved Scout’s character; a feisty young tomboy, ever curious and not very fond of conventions like wearing a dress to school. The movie’s depiction of the rural south in the 1930’s intrigued me with its poignant portrayal of racial tensions and the blatant mistreatment of blacks. This was something I was vaguely aware of from my parents, but had not seen firsthand in my northeastern home in NY.

Watching this film in later years I have

come to appreciate the social relevance of the film, not only for the awful plight of Tom Robinson and blacks in general, but also for the character of Boo, a man who might be too sensitive for this world, rumored to only go out at night and ironically feared by the children for never having seen or known him except through stories and rumors.

The movie is a perfectly fitting reminder that Halloween remains relevant to us as it invites us to try on other costumes and imagine ourselves in someone else’s shoes, especially those we don’t understand. As well, Halloween is yet another convergence of pagan (Celtic or possibly Germanic) sensibilities that found their way into western christianity, primarily through Catholicism. Catholics adopted All Saints Day as a holy day in remembrance of the dead to coincide with the pagan celebration of Samhain, the time of the year leading into the dark winter months when both the gods of the harvest and the ancestors needed our attention, propitiation and participation in the cycle of life. “At Samhain, it was believed that the Aos Sí needed to be propitiated to ensure that the people and their livestock survived the winter. Offerings of food and drink, or portions of the crops, were left for the Aos Sí.[31][32][33][34] The souls of the dead were also said to revisit their homes.[35] Places were set at the dinner table or by the fire to welcome them.[36] The belief that the souls of the dead return home on one night or day of the year seems to have ancient origins and is found in many cultures throughout the world.”

This day of the dead, All Saints day, has more recently been associated with the occult and demons, or those spiritual beings who would harm us. Halloween in some protestant churches is now known as Reformation Day, celebrating their separation from the Catholic church. But I think the sensibility found in post-reformation theology that holds to the view that the dead are no longer with us, resting in Abraham’s bosum; untouchable and unknowlable to us, might have more to do with keeping clear the separation between the spiritual and material realms. A preference for dayworld over the underworld suggests that nothing immaterial can be trusted; all spirits are demons. I often wonder how much this theology has led to the materialistic view so prevalant in western science and modern culture that says that nothing unseen exists.

But, when we close ourselves off to the spirit world, we let go of the ancestors too; their history, wounds, sufferings and especially our living connection to them which remains hidden in us, haunting our world.

Let the mockingbird remind us through her ability to mimic the song of many birds how much we might glean with eyes open for all that is seen and unseen, especially from the dead – whose struggles, fears, failings, dreams and humanity may show us something about ourselves – something hidden, afraid to come out of the house, something we need to know.

22 thoughts on “To Kill a Mockingbird”