Busy weekend here. Spent Saturday night at the coast where my husband and I enjoyed a great hike up to Cascade Head, just a little bit north of Lincoln City, on the Oregon coast. Later that night we went to Chinook Wind Casino and saw the Fab Four, a Beatles tribute band, who played two hours of amazingly good Beatles music.

The hike was a new one for us and quite lovely as it takes you from the boat launch area of the Salmon River, through the woods and into lovely meadows up to Cascade Head for an elevation gain of around 1,200 feet. Here one can see lovely views of the coast and the Salmon River estuary.

The fog began to roll in as we made our ascent.  We didn’t get a photo of it, but from on top of the mountain it looked as if the fingers of God were reaching inland from the sea. I shall not forget the beauty of that site for some time.

After enjoying lunch at one of our favorite brew pubs, followed by a quick change of clothes we headed off to see the Fab Four.

The band played three sets of music and twice changed outfits to match the period clothing of the time. Just as the Beatles music became richer and more complex with the passing of years, the Fab Four followed suit with an incredible performance of songs that the Beatles themselves never played on tour. All the music was live but in order to be true to the complexities of Sgt. Pepper, Magical Mystery Tour and later recordings, they used keyboards to reproduce much of the necessary accompaniment.

The place went wild when they played A Day in the Life. It was quite remarkable to hear such an ambitious piece of studio music played live. And all very tastefully done. Each musician showed much depth in their musicianship by playing multiple instruments as needed. When “Paul” was featured on keyboards, “John” took over playing bass, and incredibly by playing a left-handed instrument right-handed! 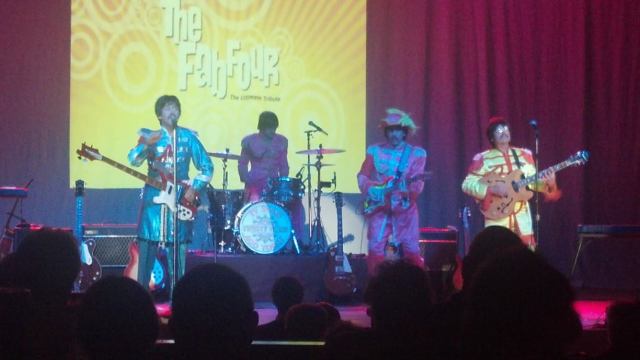 Okay, I was very impressed by their performance and also their ability to step out of character on several occasions. In a very touching tribute to John Lennon, Ron McNeil sat down quietly in front of the audience and told us how much John Lennon had meant to him, inspiring him not only to play music but to keep John’s message alive – especially his vision of someday creating a peaceful world. He then sat down at the piano and played a heartfelt rendition of Imagine. I don’t think there was a dry eye in the audience and peace signs could be seen throughout the auditorium. They truly were Fab!

Peace and Love everyone!

Thank you for visiting my blog. Except where noted, the postings here are ruminations of mine, and are never intended to be used as professional or medical advice. Peace and Love!
Loading Comments...
Comment
×
%d bloggers like this: