This weekend I won’t have much time to write. I’ll be off enjoying a weekend of pipes, drums and good friends.

“There’s an African proverb: “When death finds you, may it find you alive.” Alive means living your own damn life, not the life that your parents wanted, or the life some cultural group or political party wanted, but the life that your own soul wants to live. That’s the way to evaluate whether you are an authentic person or not.” Michael Meade 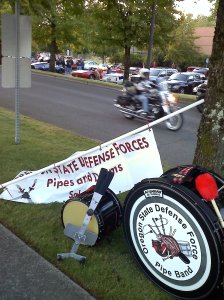 What feels authentic for me is doing the things that I love. One of those things, which took root around the age of four, was the desire to drum. As a child I quietly obsessed over drumming, doing everything I could to learn by proxy, because in the 1960’s the idea of a girl playing the drums did not sit right with my parents, especially if the girl was me.

Except for my dear Grandpa, I was pretty much discouraged from playing drums until Karen Carpenter came on the scene and my parents had to concede that just maybe it would be okay for me to take up drumming. By this time I had already made a drum kit in the basement using cardboard boxes and my dad’s table saw blades for cymbals. I was ready to be taken seriously. 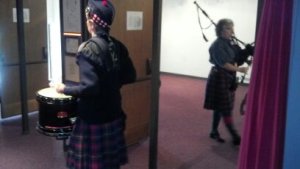 Through the years, I have been drumming on and off on a casual basis, jamming with friends, occasionally playing out at parties and public venues.

For the last five years I have been playing side drum in a bag pipe band. It’s a very technically demanding sport and you must be able to endure the kilt, the pipes, marching in long parades and a lot of memorization of scores. We get to play some pretty amazing gigs – college graduations, fairs, memorials, parades and even once played for Billy Ray Cyrus’s television show “Surprise Homecoming.”

So, I am off this weekend to play once again with the Oregon Defense Force Pipe band at the Portland Highland games and then again on Sunday at the Salem Art Fair. Happy weekend everyone!

Here is the band at a recent gig at the Newport Celtic Festival:

…and one more featuring me along with my Pipe Major playing my 2/4 competition score, Muir of Ord:

Below is a photo of us during the recording of “Surprise Homecoming.” 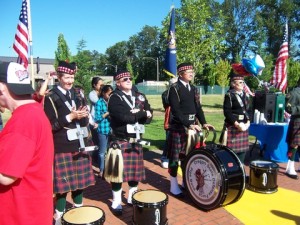 5 thoughts on “Muir of Ord”